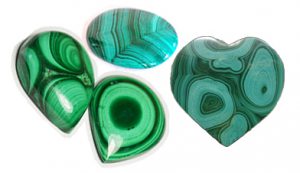 Malachite is a beautiful green opaque gemstone. It is a copper mineral; its chemical compound is called copper(II) carbonate hydroxide. Malachite stone is easily recognizable by its unique range of green color and patterns. The shades of color vary from light green with a hint of blue to deep hunter-green.

Where is malachite found?

Some of the first malachite deposits were located in Israel and Egypt. They were mined over 4000 years ago, and malachite ore was used to produce copper. Since antiquity up to 19th century, malachite has been used as a green pigment.

A Wonderland of Green Abundance… Why’s this vivid blue in the picture?

Malachite forms in the oxidizing zone above copper deposits at a shallow depths within the Earth. It is rarely found as a crystal, and therefore malachite crystals are highly valued by collectors. The crystals are usually acicular.  They are translucent, bright green in color, and have vitreous luster. Fibrous specimens are silky. Massive (non-crystalline) specimens are opaque. They are dull and earthy, but can be polished to a very bright luster. Malachite deposits are commonly found alongside blue Azurite, and sometimes the two may occur conjoined. A formation of these two minerals naturally mixed together is commonly known in the gem and mineral trading industry as “Azure-Malachite”.

Malachite deposits have been found in various locations throughout the world. Some of the notable sources are in the Ural Mountains of Russia, Arizona USA, Lyon France, El Cobre, Concepcion del Oro and Zacatecas in Mexico, Seabra Bahia in Brazil, Democratic Republic of the Congo, Zambia, Israel and Australia.

History and malachite uses then and now.

The abundance of green shades and quaint circular or striped patterns make malachite a very popular gemstone. Because it is a soft opaque mineral, it can be easily carved, sliced into inlay material or cut into cabochons, and polished to a very bright silky luster. Since ancient times to modern days malachite has been used in inlay and mosaic decorations, in making jewelry and figurines. The ancient Greeks were known to use malachite as a facing stone in construction.

Ancient Egyptians used malachite pigment in their cosmetics.  Powdered malachite was mixed with grease, and the art of makeup was combined with hygienic procedures. They knew about the bactericidal properties of malachite. Their cosmetic ointments were meant not only to color their eyelids and emphasize the expressiveness of the eyes, but also to disinfect.

Images above show use of malachite as a green pigment. The color green had a powerful symbolism to the Ancient Egyptians;  they associated green with life. The green faces on the coffins are inspired by the myth of Osiris.  Osiris was murdered by his jealous brother, Seth. Then, thanks to his loving wife, Isis, he was reborn like plants during the rainy season, and became the Egyptian god of plant life and the king of the underworld.

By the medieval times the skills for working with malachite had been lost. However,  during this historical period of common beliefs in witches and wizards, the interest in the malachite had been renewed. Malachite crosses or just the stones had been used to safeguard babies from evil spirits, cure stomach disorders, insomnia and nightmares, and to prevent injuries. People tended to attribute some magical powers to malachite such as making a man invisible, or giving a man a gift of understanding the language of the animals.

During the XVII century, large deposits of malachite and other minerals were discovered in the Ural Mountains, Russia. XVIII century became a turning point with respect to malachite as a result of the establishments of Yekaterinburg city and Gumyoshevsky mine, where specimens weighing 1500 – 2000 kg (3300-4400 lbs) were mined. By the end of 1800s, two lapidary factories in the Ural region and one near Saint Petersburg have worked to fulfill the orders of the royal family and their reigning officials. Czarist Russia used malachite generously to adorn their cathedrals. Talented and skillful Russian artisans have produced a variety of incredibly elegant artworks that were intended for the halls of the Winter Palace and gifts to foreign monarchs.

The demand for the malachite artworks of Ural artisans  started decreasing by the end of XIX – beginning of XX centuries. This could be explained by the economical and political problems of the time, and also by the depletion of malachite stocks.

The excessive mining of malachite in the Ural Mountains region of Russia lasted for about 300 years, and now malachite reserves there have been depleted. Our Earth is still rich in malachite and its deposits are found all over the world. However, monoliths of 1-2 tons in weight were only found in the Urals Mountains, and today they are no longer in a known existence. Ural Artisans continue making malachite caskets, jewelry, figurines, and other artworks, but they now have to purchase their raw materials from overseas.

Meaning of the mineral and its metaphysical properties. 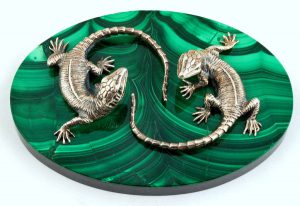 Malachite is a stone of fertility. It will guard your child from all kinds of misfortunes. Malachite is used to protect against negative energy. It embodies the energies of natural healing and spiritual renewal. It is believed to be helpful during transitional times. The mineral has power over coincidence, luck and chance. This gemstone is helpful to have around when undergoing major life changes as it’s believed to enhance intuitive abilities.

Zodiac signs: malachite is most suitable for Lions, Libra and Taurus

What else would you like to learn about malachite?

I’ve told here only a small fraction of the curious facts and fantastic beliefs about the malachite stone. If I’ve managed to interest you, please leave your feedback below, ask your questions, suggest topics for the future blogs. I will continue telling you about this and other gemstones – so, please bookmark my website and come back often.