According to the American Gem Society, October birthstones are tourmaline and opal. The origin of birthstones dates back to the breastplate of Aaron which contained twelve gemstones representing the twelve tribes of Israel. It’s believed that tourmaline is a lucky stone for people born in October. However, any individual needs to own all twelve birthstones and alternate them monthly, because the legends say that wearing a gemstone during its assigned month heightened its healing powers.

An ancient legend says that tourmaline is found in many colors because it traveled across the rainbow and gathered all its colors. Its variety of colors caused common confusion of tourmaline with other gems throughout history.

A little bit of history

Tourmaline was likely known in Saxony, Germany before 1400s.  The name “schorl” used for black variety of the mineral, comes from the name of a village, now called Zschorlau, situated near a mine with black tourmaline deposits. The Dutch East India Company sold Sri Lankan tourmaline to Europe in large quantities because at the time it was not realized that schorl and tourmaline were the same mineral.

In XVI century a green mineral found in Brazil by a Spanish conquistador was confused with emerald. Only in the beginning of XIX century mineralogists finally identified tourmaline as its own mineral species.

In 1876, mineralogist George Kunz sold green tourmaline from Maine to Tiffany & Co. In the early 1890s, tourmaline was reported in California. American deposits caused the gem’s spike in popularity. The Chinese Empress Dowager Cixi was particularly fond of pink tourmaline; she purchased large quantities of it from deposits in San Diego County.

Brazilian tourmaline discovered in the 1980s and 90s in the state of Paraíba displayed radiant blues, striking neon greens, and vivid violets.

Gemstone prospector Heitor Dimas Barbosa believed that a dilapidated old mine, Mina da Batalha, in the Brazilian state of Paraíba, was hiding a miracle that will yet strike the world. In 1981, Barbosa and his team began the stubborn search inspired by his vision. Though lacking any evidence, Barbosa felt certain that the site would hold a treasure unlike anything that had been discovered before. He and his crew spent eight years digging at the now famous Paraiba Hill in São José da Batalha. Finally, in the autumn of 1989, they uncovered the finest tourmaline crystals ever found. Spectacular electric-blue tourmaline, colored by trace amounts of copper sell for about $16,000 per carat, compared with about $6,000 for diamonds (source: Thomson Reuters Foundation). The gem dealers named these beautiful gems “paraiba” after their locality. The world’s finest, largest and most valuable specimens were mined in this region. The largest specimen weighing 191.87 carats was found in the state of Paraíba. However, the name “paraiba” caused confusion, because not all specimens from Paraíba were such unique and valuable: “Tourmaline from Paraiba” and “Paraiba Tourmaline” had different meaning to knowledgeable people.

The word “tourmaline” comes from the Tamil and Sinhalese languages spoken by people of India and Sri Lanka. I copied the original spelling of the source word තෝරමල්ලි from Wikipedia and ran it in Google Translate application. Google detected language as Sinhala, provided spelling in Latin alphabet as Tōramalli, and gave the English translation as “Ruby”. This makes perfect sense, because referring back to Wikipedia, the word “Turmali” or “Thoramalli” applied to different gemstones found in Sri Lanka. Ancient gem dealers were unable to differentiate tourmaline from other stones. In fact, there was time in history when pink and red tourmaline were thought to be rubies.

Tourmaline is a group of related minerals, rather than a single mineral. Therefore, tourmaline comes in many different colors. Most types of tourmaline are classified according to their color. The most common mineral in tourmaline group is schorl. Schorl is black and accounts for about 95% of all tourmaline in nature. The other well-known members are dravite and elbaite. Dravite varies from dark yellow to champagne to brownish black. Intense, forest-green gems are also known as “chrome tourmaline” or “chrome dravite”. Elbaite is a sub-group named after the island of Elba in Italy. It includes red or pinkish-red rubellite, light blue to bluish green Brazilian indicolite, green Brazilian verdelite and a very rare colorless achroite. Less known species of tourmaline are Siberite, Uvite, Liddicoatite, Buergerite, and several others also belong to the family. Siberite is lilac to violet-blue tourmaline, named after a deposit in the Urals. Uvite is magnesium tourmaline named after a province of Sri Lanka. Liddicoatite is calcium tourmaline named after an American gemologist. Buergerite is an iron tourmaline named after an American academic. 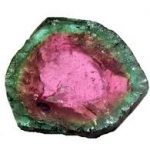 Watermelon tourmaline is an interesting multi-colored elbaite variety. It displays three colors of a watermelon in the same crystal: pink, white and green. Gems are usually fashioned in thin polished slices to display the crystal’s concentric color rings. The rare occurrence of watermelon tourmaline makes the gem highly collectible.

Schorl, Elbaite and Dravite are most commonly used in jewelry.

Not only tourmaline stone can be of any color of the rainbow, not only it can be of multiple colors in one specimen, but also one stone can change its color depending on the light and the angle at which it falls on the stone.  Scientists discovered light polarization by exploring tourmaline crystals. Tourmaline was used by chemists in the XIX century to polarize light by shining rays onto a cut and polished surface of the gem. Tourmaline crystals have an ability to completely absorb light traveling in a certain direction. Such selective absorption causes optical phenomenon called pleochroism.

Many tourmaline crystals are piezoelectric, and are often pyroelectric as well: when applying heat or pressure, one end of a crystal gets charged positively and the other one – negatively.

Tourmaline is said to be a powerful detoxification stone, which strengthen the body and spirit, especially the nervous, blood, and lymph systems. It is also believed to inspire creativity and was used extensively as a talisman by artists and writers.  Tourmaline promotes courage and confidence, and diminishes fears. It  helps in understanding oneself and others. It balances male-female energy within a body, enhances energy and removes blockages. In traditional Hindu belief systems, tourmaline is thought to affect different chakras depending on specimen’s color.

On Sept 10, 2017, the Fallbrook Gem & Mineral Society Museum in Fallbrook, California, was broken into and robbed of several valuable crystals. Five significant tourmaline specimens along with other minerals and gems were stolen. Please spread the word and be on the lookout for high-end tourmaline specimens in the market for sale or trade.

I welcome your comments below. Please ask questions, share your thoughts and additional information. I double- and triple-check the information I am sharing with you, but if you still found any inaccuracies or errors, please don’t hesitate to tell me – I’d greatly appreciate your feedback. Or, simply let me know if you enjoyed this page – I’d love to hear that! Thank you for reading.