Skip to content
HomeBlogThe Use and Care of Genuine Amber

When our ancestors discovered amber?

As a relative soft fossilized resin, which could be easily cut and polished, amber jewelry was valued and loved since ancient times. This warm and glowing organic substance has always attracted people by its beauty, and also by its healing abilities.

The oldest amber recovered dates to the Upper Carboniferous period (320 million years ago). Amber has been known to humans since prehistoric times, and stone age artifacts are common in the museums. The large Baltic amber beads were found in the chest ornament of the Egyptian pharaoh Tutankhamen (ca. 1333–1324 BC). Amber was moved from Northern Europe to the Mediterranean area since at least the 16th century BC. An ancient trade route for the transfer of amber from coastal areas of the North Sea and the Baltic Sea to the Mediterranean Sea is known as The Amber Road.  Our ancestors called amber the ‘Nordic Gold’. Amber jewelry, amulets, and carvings were found at the Viking age burial sites in Scandinavia.

The first written mention of amber dates from 883 B.C. In the stone obelisk in Egypt land, the carved words were discovered stating that an Assyrian ruler Ashurnasirpal sent his people to the land where seas wash the amber shores, “the land of amber”.

How was amber used in the past?

Besides decorative use, amber has several other useful properties. They were noticed by the ancient people and often exaggerated as for the lack of scientific explanation.  They believed that amber has mystical powers. In ancient China, it was customary to burn amber during large festivities. Burning amber creates a specific pinewood scent. If amber is heated under the right conditions, amber oil can be produced.  In past times this oil was mixed with nitric acid to create a peculiar musky odor.

The ancient Roman and Greeks were aware that wearing amber on the skin relieves pain, reduces inflammation, increases energy and improves metabolic functions. Greek “Father of Medicine” Hippocrates was the first to describe in his works medicinal properties of Baltic amber and methods of its application.

Modern Use of Succinic Acid and Healing Powers of Baltic Amber

At present days, we know that Baltic Amber or succinite contains a high amount of succinic acid, which was first extracted from amber in the 17th century. Succinic acid regulates metabolism, strengthens immunity and protects against various toxic poisonings, including alcohol. It increases the activity of cellular respiration and is helpful in treating hypoxia. Succinic acid is known as an anti-inflammatory remedy and it’s responsible for pain relief. To this day Baltic amber is used as a natural antibiotic.

Tens of effective medicines containing succinic acid are manufactured and patented in the US and Russia. FDA recognized succinic acid as safe for intake by humans.  Also, the acid may be called a scientifically approved elixir of youth. It acts as an agent slowing down the loss of potassium ions and an antioxidant, which is used in the pharmaceuticals preventing the aging of human cells. Athletes would greatly benefit from the succinic acid because it is a stimulator of a balanced, comprehensive development rather than a stimulant of one-time effort.

Succinic acid is found in small amounts in many plants.  The richest plants in the acid are unripe gooseberries and rhubarb stalks, but even they contain a thousand times less of the acid than the Baltic Amber.

While succinic acid can be extracted from the plants and Baltic amber and purchased as a supplement, the Baltic amber itself, rich in the acid, is also effective when wearing on the skin. The body heat initiates the release of small quantities of succinic acid from amber, which mixed with the body oil is absorbed by the skin. 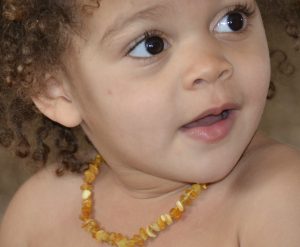 Amber teething necklaces and bracelets became very popular among parents for numbing and calming irritated gums of a baby. Amber is indeed effective as a natural pain reliever, anti-inflammatory remedy, and a central nervous system calmer. It is absolutely non-toxic and very pleasant for the eyes and to touch.  Baby necklaces or bracelets are not supposed to be chewed on but worn on the skin. They are usually made with a secure lock: a child wouldn’t be able to take the necklace off independently. However, I must warn the parents: if string breaks and beads get loose, a baby most likely will put them in the mouth. While a small non-toxic bead will find its way out with no harm to your baby, a bigger bead could cause the baby to chock on. I personally do not recommend to leave your baby unsupervised while wearing such beaded jewelry. If you decide to go for it and get your baby a teething amber necklace, I hand-picked this selection for you at Amazon (the beads in these necklaces are individually knotted for safety)

While precaution has to be taken in regards to the amber pieces for a baby, there is no downside or a warning of any kind on amber jewelry for adults. Amber is warm, gorgeous, and healing – excellent for you in all aspects!!!

Your family dog or cat may also benefit from the wonders of amber.

How to Take Care of Genuine Amber?

In general, amber requires minimal care to keep it in a good condition.

This delightful healer will treat you well – take a good care of it in return!